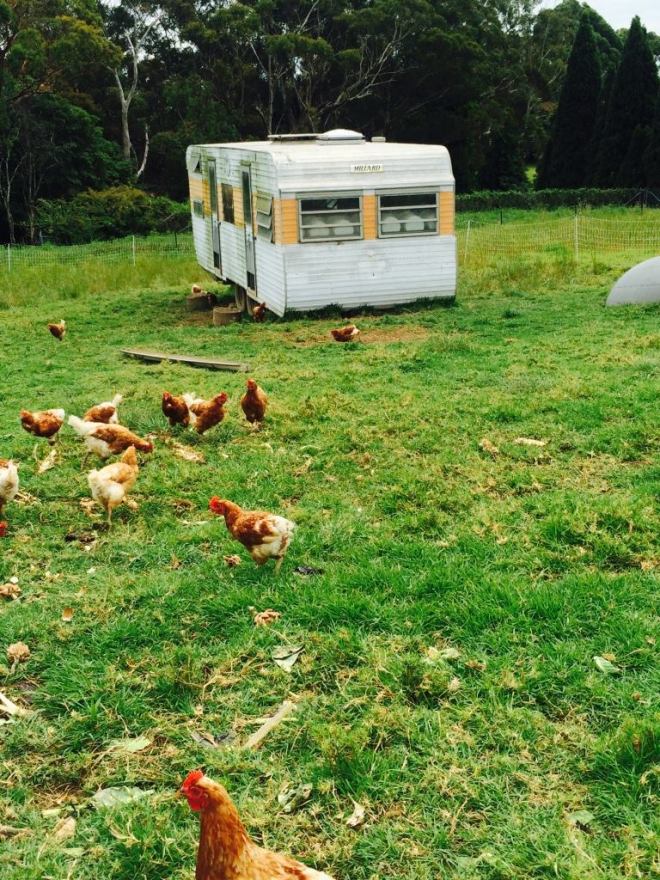 You Can Bet the Farm

They say: “You’re living my dream.” They have fantasies of moving to the country and growing their food. They picture sitting in the patio nestled in green with a breakfast of just-hatched orange yolk eggs, a salad of sun-warmed tomatoes, or a fluffy omelet of just picked herbs and arugula.  They imagine waking up to the chirping of birds, the whiff of fresh air, and then tending to the sprouts in the garden with a nice straw hat and a cotton tee. Later, they will sit in their lawn chair and sip iced tea made from the climbing blue vine, take an afternoon nap, and then read a homesteading book in a cozy garden nook, with magnificent dragonflies dancing.

This idyllic life does not exist. Alright I’m eating just hatched golden eggs. But to get to that, I rouse to 7 roosters crowing- when the sun rises. And right, I do get a crisp salad with the colors of the rainbow. But to get to lunch, I need to get a whiff of manure, listen to the hens every clucking minute as they lay the golden egg, and the dragonflies? They dance alongside flies the size of of raisins. There’s no sound of quiet. Instead there is a cacophony of: the bee humming; the noisier buzz of the fly who deems best to buzz in my ear; the white noise of the grass cutter; someone sawing and hammering; workers chattering (and playing sad love songs); alright a bird chirping; and chickens squawking. So what, if backyard chickens are the new “it” pet?

Honestly, someone has to lay it bare. And who else but a girl from the city who married into farming and is now living with 70 chickens and 4 compost heaps.

Like you, I didn’t think farming required such drudgery and dirt. My father was a farmer. Well, a farmer from Negros, where hacienderos didn’t do a great deal except have long conversations about vast landholdings over gin and and hunt the fields. And like you, I fancied a countryside home with a kitchen garden.  Except that there’s a huge gap between browsing through hipster farm pictures and shovelling compost.

First, you will never have your garden back. The chickens will scratch and dig up your lawn and even your ornamental plants. The chicken coop is only cute on Instagram. It’s dark and messy, and it has you breaking your back every day as you clean it. And months before I got my leafy beds of turmeric, corn, okra and eggplant, or the climbing vines of squashes and beans, I lived in misery. I would stare at beds that resembled burial mounds, and mourn a garden that was now a dirt yard with black seedling trays. You can dream all you want, but that pumpkin won’t turn into a coach. It won’t even become a pumpkin so easily.

Second, no one gardens with a nice straw hat and a pretty shovel. (Even when my yard work consists of just weeding and keeping the garden neat and trim.) You need to wear pants and long sleeves or you’re all bites and scraped knees. You don’t wear flip flops or nice boots either. It’s the cheap water-resistant ones you need. The hat is a hindrance and so I’ve cast it for a bandana instead. It’s not for shade, it’s for the leaky faucet on my head.

Third, there’s no hobby farm. Farm life, the one that gives you golden eggs and salad days, is tedious. It’s muddy boots that houses a frog. It’s the same shit on different days. It’s a hallway of dirt tracks, and where tracks lead to the bathroom, to the yard, and back again. It’s a truck, a van, a car caked with soil. It’s a backyard hobby that gets out of control. It’s the whole gamut of an ecosystem: climate change, and soil, and seed, and sapling, and tree and fruit. And while I admit the rewards are worth their weight in golden eggs, still you will need a shitload (pun intended) of patience, some tears, the ringing of ears, muscle power and spotted legs.

And so this is my advice to you: urban dweller, city kid with a tract of land somewhere, hipster, or another gal who wants to save the world one food garden at a time: To embrace this idyllic life, you will need grit and you will need soul. You’ll need to be bitten hard by the farming bug. And I know the hubby will shoot me for nipping some people’s farming dreams, but I daresay: before throwing it all for the farm life, try it first. Muck around with it.  Don’t quit your day job until your feet are long wet. Perhaps spend days in a working farm, the School of Hard Knocks. Try ingesting the daily rhythms of a farm life (try ingesting the dung too.) If there’s no way to volunteer or apprentice, start with a small parcel and befriend soil and sweat. Small and slow. Do it for a year or two. Then, you’ll know if you’re infected by the bug and if eggs are worth all the trouble; if you prefer flocks to your gadgets; or collecting eggs to collecting antiques; or the bitter smell of manure to air-conditioning.

Your gut will know. And especially, your heart will know if it’s the right place. You should yearn for it the way you crave black coffee or the sea. The way you don’t mind a racing heart and being revved up all day. The way you won’t mind sunburn and welts, or stings and sand mites. I have a husband whose eyes light up when he sees a brood of chickens, and whose nose will follow the scent of manure anywhere. He wakes up at 4:00 AM to shovel earth, and yes he yearns for it like an exquisite cup of coffee. Otherwise, throw away well laid-out plans for the vegetable beds, let the farm go, and return to watching nice farm videos.

And I’ll bet the farm on this one.