A bumpy Carabao ride, trees filled with the promise of fruit, pigs romping in muddied pools, dragonflies I couldn’t count, a gulp of milk from cows we milked ourselves, and feeding the ducks, that was our morning. It was granddad’s 82nd birthday and Wowo had spent his morning at the farm, up before everyone else. I was wondering why so. On my birthday, I would skip work and perhaps do something special. But, as he did every day all his life, granddad started his day to the rooster’s crow, taking in the scent of cows (and dung), and walking the entire stretch of his farm, jubilant, just like his fruit trees bursting with flowers. We followed him to the farm, my daughters and I riding the “Karumata”, a rickety wagon driven by a carabao, because one farmer thought it was too far a walk for our feeble city legs and we couldn’t take icky mud. First stop was the pigsty. The pigs had just moved to a new romp and rollick pen. In the world of pig, this was the castle of your dreams.

The pigs had two mud pools, wide open spaces, rich green grass and an expansive backdrop of sky. Although, my 4 year old kept asking me what happened to them after they had “pigged out.” To which I said: “shh.” (After all, one greedy pig ended up on my father-in-law’s birthday buffet.) 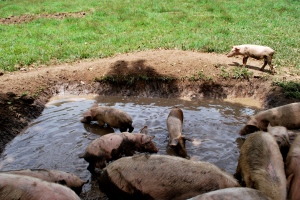 We found their grandfather 2 hours later in his hat and boots, cheerfully romping around in his version of castle. I was watching him from afar, in awe at how at 82 he could still hike up his entire farm, steep, lumpy and muddy in places, with just a walking stick for company. Not to be outdone by an 82-year old cowboy, we ditched our very bumpy ride to stroll with Wowo. We walked for another half hour, surrounded by Mango, Guava, Pomelo (too many trees I couldn’t name,) and alongside Mother Goose and Jemina Puddle Duck. Wowo stopped a few times to cackle call the hens and ducks, who amazingly came waddling, patiently waiting for breakfast. The sun was scorching when we got out of the trees. But there were still cows to be milked and Wowo had promised my girls they were going to feed the ducks together.

It was the perfect birthday for their cowboy and gentleman grand-farmer. The trees were full to bursting with yellow flowers, there was abundant grass for the cattle, the milk was flowing, the pigs were enjoying their swimming pools, and the ducks just had breakfast. My 4-year was now strolling around with a stick, mirroring her granddad. She was at her best self, because Wowo promised her the brown colt we just passed. My 7-year old proudly declared: “Mommy, I’m going to be a cowgirl when I grow up.” Perhaps my children understood as only children could, what was left unsaid but deeply felt. Here was a contented man who lives, as he ought to. As himself. Working his passion, doing what he loved to do, not an hour or two a day, or just on the weekends. Here was someone spending his everyday “surrounded by cows and china.” (Thank you Charles Dickens.) Which brings me to this conclusion: Flossing, sunscreen and watching what you eat won’t get you to 82 and still able to walk for miles in rough, muddied and uneven ground. Waking up to a rooster crow, breathing in fresh air, working the land, and doing exactly what you love, everyday for the rest of your life, is the only age-old secret you need. (That, and of course, and beautiful grandchildren to feed the ducks with.)