I escaped. Drove to the closest semblance of an adult world, desperate for coffee and solitude. School had already started except that the awaited quiet was revoked by Laguna Day and then a sore eye on a school day. Summer break was finally over. Yet I had no deliverance and I was going mad.

“I didn’t have such a good day today Mama. Can you fix it?”

And I, coffee in hand without a dollop of solitude, go home. Just like that.

Her day had gone awry and she needed me to set things right. I should be there, in the world of my 6-year old. Where I magically mend things with a flick of a wrist. Where I can still coax her to portray me as a mermaid in a shell bikini, splashing in the sea. Where she pesters me to please allow her a glimpse of the stars that fly off my fingers. 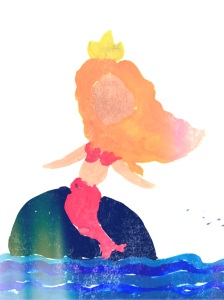 “What’s this, what’s that, mama?” Because I create her worlds by naming them.

And she’s there, waiting for me to straighten crooked days and sing things into being. How can I run away from that?

“Don’t leave.” my mom said. I had called her complaining about visions of sinking to an underwater cave. And settling there. “It bugs you that they’re there all the time but one day you’ll be looking over your shoulder, and they’re no longer there.”

And I can see it. I’ve been looking over my shoulder for my older child. She’s often there. But there are days when I glance up and she’s gone. Off to a nook where she’s reading a book, seized by another world I didn’t sing into being or name. Off to a bike adventure I didn’t lay out.

I can see it. One day, when this bugger discovers books, solitary adventures, and open spaces, there won’t be anyone to draw me in a fishtail by the sea.  Out of the castle, pushing boundaries, off to open spaces. (Hopefully not with a man on a white horse.) And I won’t be the good witch with cascading stars on her fingers. I might just be a witch with a broom. Or an old hag. And I will lose my powers that can do no wrong, even forget the songs that set everything right.

Except not yet. Not today. She’s still here. In the castle I built. Captive, captivated, needing to be where I am. In the world of my 6-year old, I am the sun and she whirls around my pivot. And she can’t have a sun that’s half here and half at a cafe or lonesome by the sea. My daughter needs to trust that my music and incantations don’t get jumbled together or that the stars don’t fall where they shouldn’t. Our castle cannot have a frazzled queen.

And so there’s no escaping today. I will quit whining about the scarcity of caffeine or peace. Why do I need perking up when I’m shooting stars off my fingers? I should dream up an underwater cave that serves coffee. And so, exhale this seeming exhaustion. Inhale the bugger, the endless “but why’s”, and the round-the-clock summon for my mending hand.

When your 6 year old calls a bad day and pronounces you to be the only mortal who can make it right, you don’t bug out. You go home.